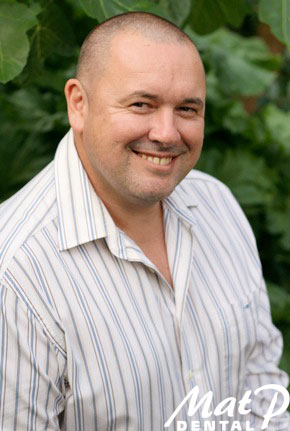 Here at Mat P Dental we want to make your dental experience a positive and rewarding one. With our purpose built, modern and comfortable surroundings we offer a wide range of dental treatments for the whole family.

At Mat P Dental we aim to

We believe in treating people the way we would want to be treated ourselves.

Mat Popham graduated as a Dental Surgeon in 1996 from Otago University. Upon graduating he spent two years in the hospital system. This was followed by a year working in private practice in Wellington before heading off on a two year OE with wife Anna Fulton. Five years later they returned to New Zealand and settled on the Kapiti Coast, living here ever since, with their now teenage children, Holly and Toby.

‘I am a general dentist, jack of all trades and problem solver by instinct. I have special interests in minor oral surgery, Implantology and Forensic dentistry. I was privileged to be involved with Disaster Victim identification after the Christchurch earthquake, Carterton balloon crash and the Christchurch Mosque shooting. These trying situations bring the greatest level of personal and professional satisfaction of a job well done. I enjoy going to work every day and look forward to the challenges each day brings.’

Anna, Mat’s wife and Mum to Holly and Toby, is a teacher by trade but 25+ years of living with a Dentist has prepared her well for many aspects of running a dental practice.  Anna’s aims as practice Manager are to ensure a well-run practice for both staff and patients.  She hopes that every patient coming through the doors of Mat P Dental feels welcome and looked after throughout the entire process whether it be a simple exam or a more complex treatment plan taking multiple visit.  She wants to make sure all staff are supported in their jobs and know they are valued as integral parts of the team.

Sam joined the Mat P Dental team towards the end of 2019. Sam has always lived on the Kapiti Coast and spent several years in retail before coming to work at Mat P Dental. Sam is always at the end of the phone or email ready to assist you. Multitalented, you might also see her in the surgery covering for  one of our Dental Assistants when necessary.

Amy has been part of the Mat P Dental Team since 2015. She currently works as Mat’s Dental Assistant three days a week.

Sarah has been putting up with Mat’s jokes since 2005 and is a founding member of the team at Mat P Dental. She currently works as Mat’s Dental Assistant two days a week.

Chloe joined Mat P Dental mid 2020 and is a quiet but dedicated and hardworking member of the team 3.

We’re happy to take your request for an appointment, simply fill in the form.